Windows CE systems have dominated the mobility market for decades. However, the recent years, Microsoft has ended developing more updates for this system. According to Microsoft, it will cease all platforms of support for Windows CE. As a result, Windows CE 6.0 end of life happened in 2018, and on January 14, 2020, Windows Mobile 6.5 end of life occurred. This means companies who are still using Windows CE will see an end to security updates and patches.

Why Migrate from Microsoft Windows CE OS To Another Operating System?

Your Data Is Vulnerable

Businesses that will continue to operate using the obsolete Windows CE are vulnerable to security issues and inefficiencies. Any mobile device that is equipped with an outdated OS will naturally fall short of its performance expectations. In the end, these inefficiencies will have a huge negative impact on productivity.

Moreover, any mobile device running on legacy Windows OS is susceptible to threats like a data breach. End of life for devices with Windows CE means they will no longer have security updates. A research published by the Ponemon Institute, the average cost of an enterprise data breach is $3.86 million. This could cause a devastating financial burden to any company. To avoid such issues, consider migrating to rugged devices that run on Android or Windows 10.

Hacking is another common threat for devices using legacy operating systems. Windows-based OS’ end of life is common industry knowledge so devices equipped with these outdated systems will be easy targets for hackers.

Hackers can easily find ways to infiltrate security when your business is using outdated devices. Without security updates, these devices are to malware, viruses, and ransomware. Any mobile device with Windows CE is a potential risk for device and network damage. According to research by the University of Maryland, the Internet experiences hacking every 39 seconds on average. Furthermore, research by Fundera, shares that 43% of cyber-attacks are targeted at small businesses, costing them more than $2.2 million annually.

Running on legacy OS like Windows CE can also potentially risk your stakeholder’s data. In 2014, one of the largest data security breaches happened to JPMorgan Chase. As a result of this security breach, 76 million households and 7 million small businesses were affected as their information was exposed.

If you are operating in an industry that requires you to store sensitive information, it is important to always update your data security. Unfortunately, this is not possible when using Windows CE. Migrating to a modern OS, such as Windows 10 or Android, can help mitigate data breaches.

What is Windows CE – A Quick Lookback

Windows CE is a version of Microsoft Window’s desktop OS. Launched in 1996, the Windows CE aimed to provide lasting changes for the mobile and handheld device market. Later renamed to Windows Embedded CE, as well as, Windows Embedded Compact. Nevertheless, most users still call it Windows CE. This operating system was well-received because it allows seamless multitasking, supports multi-platform and multi-thread. However, while it is extremely promising, it supports only part of Win32.

An End-of-Life status indicates that a mobile device will no longer receive security and software patch updates. It does not mean that the device will stop working it simply means users will have to use legacy software to continue running. As mentioned above, companies that will continue to use legacy operating systems will be vulnerable to bugs and defenseless against viruses.

End of life for Windows CE has become a serious worry for different industries. For example, in healthcare services – medical devices are widely used rely on Windows CE. These medical devices run on software that is designed for collecting, storing, and transmitting data from one device to another. As these devices play a major role in patient care, it is crucial to find the right upgrade from Windows CE.

Unfortunately, for some industries, it is not always easy to transition to another device. It might require a huge amount of work to check which operating system will be suitable for your business. As a result, many companies have opted to stay with their Windows CE device compromising security. Some of the things that should be considered when changing devices are: 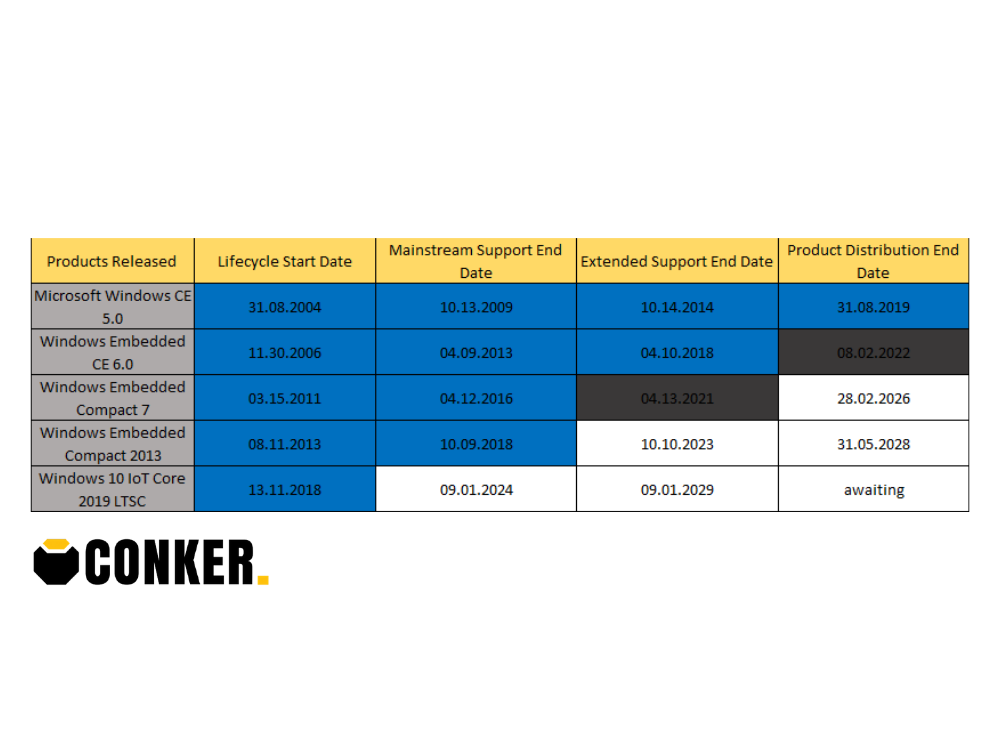 The best way for companies to achieve digital transformation is to modernize their obsolete operating systems. However, before moving away from Windows CE, you should consider the migration options that you have.

The first option is to use Microsoft’s newer operating systems like Windows 10. If your team is already using a familiar Windows operating system, Windows 10 will be an excellent upgrade. Windows phone such as Conker NS6 comes with a fast and user-friendly OS. In addition, it offers integration with Microsoft-linked products allowing advanced security and artificial intelligence features. Coming from the same developer, migration to Windows 10 promises to be a smooth ride for Windows CE users.

The challenge is that many Windows 10 rugged devices are cumbersome. As a result, businesses that are consistently on the go will find it harder to use these devices. Conker NS6 meets the demand for a small yet powerful Windows rugged device.

Android has also emerged as a top operating system that is compatible with rugged devices. A published report by VDC Research shows that Android OS users have grown from 24% to 37% in 2015 – 2016. The move from Windows CE to Android can bring numerous benefits for businesses. For your employees, migration will be easy because Android is also a very common and familiar operating system.

Besides, Android OS provides an open-source platform that allows developers to smoothly and quickly respond if your software requires an update. Initially developed as a mobile operating system, Android is now extensively used in numerous devices, including embedded systems. Another benefit of Android is that it is easy to program. Typically, it includes necessary APIs for smooth integration with any software or custom solutions.

The downside, Android is not an RTOS operating system. As a result, some businesses may encounter problems if their products require real-time solutions.

There are dozens of companies out there are who are still relying on their WinCE rugged devices. Some of the common examples are still widely used by thousands of companies. Here are some suggested hardware upgrade pathways that your company can follow.

Benefits of Upgrading Your Hardware

The devices mentioned promise to provide streamlined data capture and storage. These computers such as the Bartec MC92N0 line are powerful handheld devices that are an essential tool for industries like warehouses, delivery, manufacturing, and retail. However, these devices use the legacy OS Windows CE or Windows Embedded which will soon be vulnerable to issues.

The Conker NS6 features a small frame – the smallest rugged Windows 10 handheld device in the market today. It boasts of business tech solutions such as an optional 2D barcode scanner, Intel Quad-Core 1.44GHz, Windows 10 Enterprise, 4 GB memory, and G4GB storage. The benefit of transitioning to a more powerful Windows device is that you no longer need to worry about reconfiguring your software for a different operating system.

This is a rugged PDA that promises to provide productivity-boosting features. Weighing only 250 grams it is one of the lightest but extremely robust Android rugged devices. Some of its stand-out features include an Octa-Core Processor 1.3GHz, Android 10 operating system, IP67 rating, and Zebra SE4710 2D barcode.  This rugged device ensures businesses will experience simple yet powerful solutions. Since Android is one of the most common operating systems it is a must use for every industry.

Windows CE migration is never an easy and straightforward project. It requires having a holistic approach from picking the correct hardware up to choosing the best application layers. It also demands that teams use a technology architecture that meets the current and future market demand. Migration will represent a substantial investment. Therefore, the total cost of ownership should be a priority for any business consideration. To know more about the Total Cost of Ownership, make sure to check out our resources.

Thank you for your excellent communication. We were always kept up to date with progress on our repair, thank you.

We use cookies on our website to give you the most relevant experience by remembering your preferences and repeat visits. By clicking “Accept All”, you consent to the use of ALL the cookies. However, you may visit "Cookie Settings" to provide a controlled consent.
Cookie SettingsAccept All
Manage consent

This website uses cookies to improve your experience while you navigate through the website. Out of these, the cookies that are categorized as necessary are stored on your browser as they are essential for the working of basic functionalities of the website. We also use third-party cookies that help us analyze and understand how you use this website. These cookies will be stored in your browser only with your consent. You also have the option to opt-out of these cookies. But opting out of some of these cookies may affect your browsing experience.
Necessary Always Enabled
Necessary cookies are absolutely essential for the website to function properly. These cookies ensure basic functionalities and security features of the website, anonymously.
Functional
Functional cookies help to perform certain functionalities like sharing the content of the website on social media platforms, collect feedbacks, and other third-party features.
Performance
Performance cookies are used to understand and analyze the key performance indexes of the website which helps in delivering a better user experience for the visitors.
Analytics
Analytical cookies are used to understand how visitors interact with the website. These cookies help provide information on metrics the number of visitors, bounce rate, traffic source, etc.
Advertisement
Advertisement cookies are used to provide visitors with relevant ads and marketing campaigns. These cookies track visitors across websites and collect information to provide customized ads.
Others
Other uncategorized cookies are those that are being analyzed and have not been classified into a category as yet.
SAVE & ACCEPT